Bert Case​ died. I loved that guy. I was lucky enough to work with him when I worked at WLBT in Jackson for a few years (2002-2004). He was just awesome. Anytime I got to be his photographer (which was rare) he would tell the greatest stories. No matter where we went he had been there and knew a story about it: Floods, trains, Fordice, Elvis, and a million other awesome things. I could literally point to any town we passed and ask "Ever done a story there?" And the answer was always "Oh yes indeed. Back in 19..." Every time. 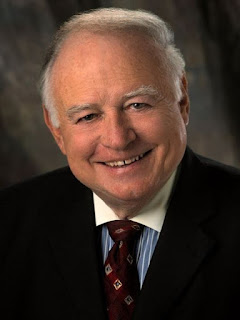 One afternoon I asked him why he always said his name as "Berrrt Case." He told me that when he was just starting out as a reporter a lady saw him in the grocery store. She asked him "Is your name 'Bird Cage'?" He said after that he tried to over annunciate it in a way so that people would know what he was saying.

He told me about when he met Elvis, about covering the 1979 flood (and a bunch of other floods), traveling across the country by train, the infamous Kirk Fordice "I'll whip your ass" incident (one of my favorites that I heard multiple times), and a ton of other stories.

One afternoon he and I were charged with doing a story about a new building opening downtown. The owners were having a press conference to reveal the name of the building and their "big new client" who would be taking up residence. Bert wanted to scoop everyone and announce it the day before.

We knew where the client was coming from but not who it was. We went to the building they were leaving and asked about it. Building manager said he couldn't say anything and Bert went with him to his office to try and convince him to. While they were gone a custodian walked by in the lobby. I asked her "Ma'am, there's a law firm that is moving out of this building. Do you happen to know which one?"

She instantly replied "Oh yes! That's (name of firm). They're up on the 3rd floor. You can see all the boxes and everything. They've been packing up all week."

I took the elevator up and got some footage of all the boxes through their glass front door with their name on it. When Bert came back he was all mad because he'd had no luck, and when I told him what I got he just cackled and shook my hand. "You're a real journalist now!"

We went back to the building to film his stand-up and dig around for more info on the name. He started talking to some landscapers who were putting the finishing touches around the sign (which didn't have the name on it yet). They gave him nothing again, but while they were talking I spotted a delivery guy sitting in his truck. I wandered over and slyly said "Hey man. You know what this building's called don't you?"

"Well, if you go inside and down the main hall the second door on the right is where they are keeping the sign."

So I slipped inside and sure enough, right where he said was a big sign on the floor that read "City Center." I told Bert and he stood in front of the empty sign and landscapers to film a quick stand-up. He told me to watch the expressions on the guys' faces to confirm it.

"...and tomorrow they will unveil the name of the building behind me to be City Center." Both guys' heads instantly jerked up and they looked at each other with shocked expressions. Name confirmed. "Berrrrt Case, WLBT News, Jackson."

When we got back Bert slapped me on the back as he told the story to Dennis Smith our News Director and gave me all the credit. "This guy is good! You need to get me more guys like him to work with!" I just beamed. Probably my best day at WLBT.

Rest in Peace, Bert. I consider myself lucky to have been able to work with you.